This blog is supposed to be primarily about economics, with occasional detours into food and other topics.  Thanks to my New Years Resolution to stop eating bad hotel bar cheeseburgers and my new toy, it has veered heavily towards the food side the last several months.

Our frosting attempts clearly show that neither my son nor I had ever used a pastry bag before.

The Rain in Spain

Most people in the class came in pairs or in groups. But at the station next to ours, there was a woman by herself. She arrived about 15minutes late, so she missed the beginning of Chef Brown’s lesson on zesting and sectioning a lemon.  She asked me what he had said.

After I got her caught up, we started talking more generally.  Turns out she’s Spanish, from the Canary Islands (Islas Canarias en espanol). She’s in DC for 2 weeks to visit her sister.  While she here she’s also learning as much as she can about American-style cupcakes.

She said they have cupcakes in Spain but the cakes are much denser. More like muffins than what we’d call a cupcake.  Certainly not what we’d expect from a gourmet cupcake like you get at CakeLove. And there are no banana cupcakes topped with  strawberry butter cream, chocolate and toasted peanuts. 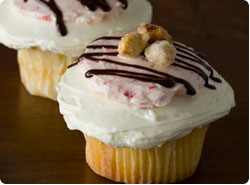 Her goal, when she returns to Spain, is to open the first American-style cupcake bakery. She wants to introduce Spain to what we call a cupcake and she thinks she can make a good living doing just that.

She’s been practicing her technique since February and her butter cream frosting showed it.

If you’ve been following the news the last several years, you know that Spain has been hit hard by the on-going financial crisis. Unemployment is above 25% and youth unemployment is well over 50% (my new friend is very young).  As the Atlantic magazine points out, this rate is terrifying.  An entire generation of Spaniards are being shoved to the economic sidelines because of calcified labor policies which close off opportunities for the young.

My classmate (I never did get her name. The class was pretty frantic.) is one of those young people. She lost her job six month ago and has been trying to find something ever since. She’s  given up on the opportunities the Spanish economy has to offer and is trying to create a new opportunity for herself. Gourmet cupcakes just might be her ticket to a better, more prosperous life.

When Austrian economists like me get misty eyed about entrepreneurs, this is what we are talking about.  Not just a small business owner. Not just some one who is recreating the same business model thousands of people have used before.

No. By entrepreneur we mean some one who is taking a risk. Trying something new. Trying, for example, to import a new kind of food into a country.

If she can pull it off, if the Spanish really have a latent taste for American style cupcakes, and if she can make cupcakes at a price the Spanish are willing to pay, then she stands to make a lot of money. And if she does succeed, good for her.  She saw an opportunity.  She took the initiative to try to make that dream real.  She took the risks and, if it all works out, she deserves the rewards.

We spent 3 hours together. During that time we mostly zested lemons, creamed butter and filled cupcake cups.  But we did have just enough time for her to tell me about her dream.

I hope it comes true for her. If she is right, if the Spanish will enjoy an American-style cupcake, then she will have made thousands, or even millions, of Spaniards happier.

And that is where all true economic growth comes from.  From an single  Entrepreneurial Hero making a bet and winning or losing according to how well she serves her customers.

I read and I write. I read a lot and I write when I can.
View all posts by fzinger →
This entry was posted in Economics, Food and tagged Austrian Economics, cupcakes, economics, Spain, unemployment. Bookmark the permalink.