I live 50 miles south west of Baltimore.  That’s close enough that I get up there frequently. It’s also close enough, that I always come home in the evening. That means I miss a lot of what Baltimore has to offer.

This weekend I spent three and a half days and three nights in Baltimore. That gave me the chance to sample several joints I’ve been lusting over.  From street tacos to eclectic pizzas to funky breakfasts, Baltimore didn’t disappoint.

I’d driven past this place, without even knowing it was there, for years.  When I finally heard about it, I still didn’t stop. I was always in a hurry and they were supposed to have a line out the door whenever they were open.  This trip, my kids and I had the time, so we stopped.

It was worth the trip.

When we got there, there were only 2 people in line in front of us. I took advantage of the situation to go to the restroom (50 miles is 50 miles). By the time I got back, there were 8 people in line! 8 people, fighting their way through a very crowded gas station parking lot for a taco?  At 2:30 pm? That says something very positive about the food.

I ordered one Taco Al Pastor (spit roasted pork with pineapple), one Pollo Huaraches and one Taco De Barbacoa (lamb).  My son got a Carnita Taco and my daughter got a Pollo Taco. My daughter dropped the Barbacoa Taco, so I never got to taste that one. 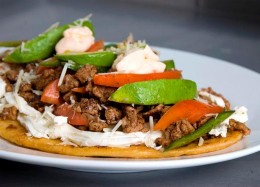 My Taco Al Paster was exactly what I wanted. Tender pork. Some heat. Garlic, herbs and cumin. All with a little bit of char.  Perfect and it only cost $2.19!  Two dollars and 19 cents!?!  Obviously, they are paying attention to their food costs. That’s one great thing about R&R. They are cheap in the best possible sense. Very good food for street vendor prices.

Almost everything else was just as good.  My daughter reports that the Pollo Taco was great. I really liked the Pollo Huaraches, though for the calories and money, I wish I’d ordered a couple more Tacos Al Pastor instead.

The only flaw was that my son’s Carnitas Taco was cold.  The meat was obviously  prepared a head of time and was supposed to be reheated before serving. Which is exactly what you’d expect at a taqueria.  That’s fine, if you reheat the meat. My son’s taco, somehow, made it to our bag without stopping by the flat top first.

Their gas station location has just 6 stools (of which only 3 are usable because of the line around the cash register) and a terribly crowded parking lot. They’ve opened a new location which will hopefully make them more accessible. 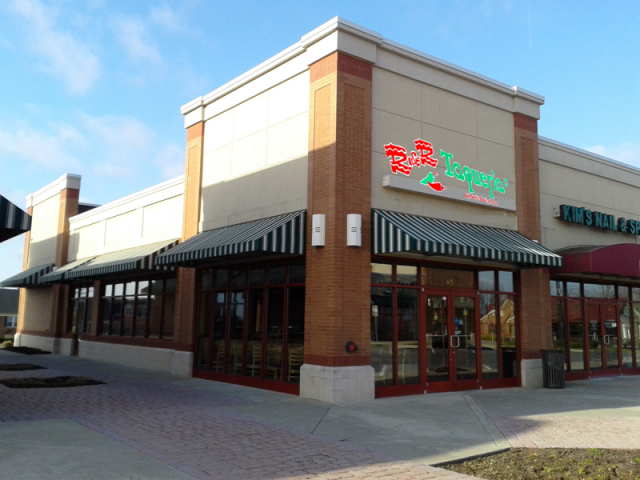 Recommendation – Go. They have a flavor per dollar ratio which is hard to beat.

Saturday morning we had breakfast at the Blue Moon Cafe.  This Fells Point breakfast joint is almost twenty years old. We arrived at 8:30 am and there was already a 45 minute long line (a common theme in these reviews). 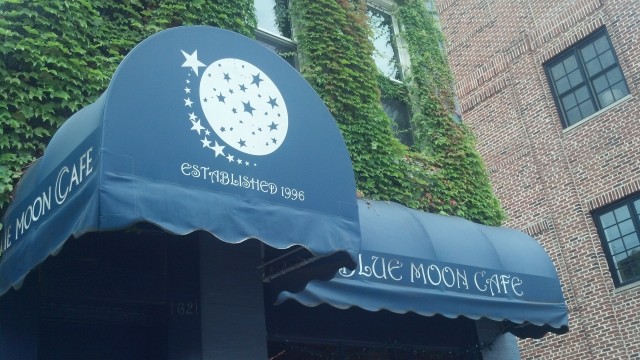 We waited with various levels of patience (I did have a 16 year old and a 13 year old with me), but were seated after the promised 45 minutes.  Again, it was worth the wait. 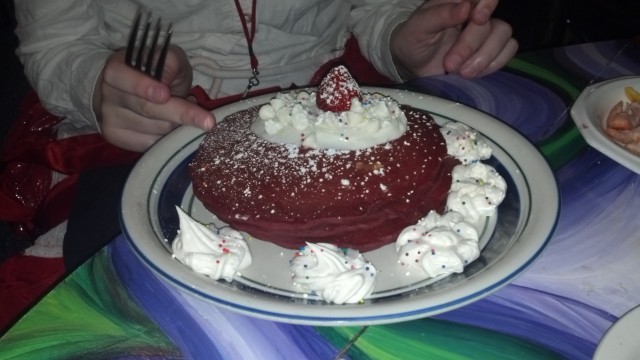 Instead of the french toast, I ordered the “Sweet Baby Jesus”, an enormous plate covered with hash browns, eggs, tomatoes, crab meat, hollandaise and  cheddar. 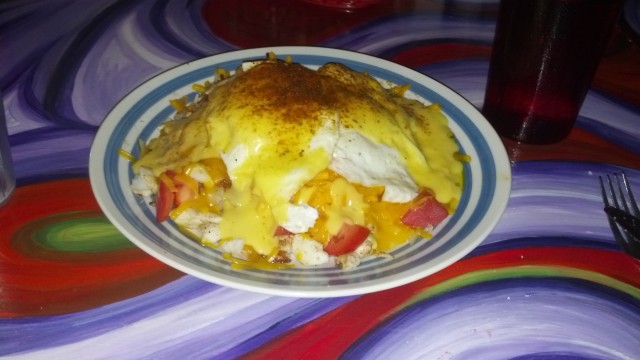 The food took a while to come out.  This is a neighborhood joint which has experienced a surge of traffic from tourists like us.  And their regular Saturday morning traffic seems to be pretty heavy.  Plan accordingly.

The wait wasn’t that big a hardship. Even though the restaurant is small and energetic, it never felt crowded or loud.  The staff worked hard to make sure we were comfortable. The coffee was good and strong. They brought the biscuits as soon as we ordered them.

My first Sweet Baby Jesus was served cold, though. Despite the waiter’s promise that the hollandaise was served, “Hot, hot, hot.”  My kids’ pancakes were hot, so I suspect my eggs were finished first and sat, waiting, for the pancakes. That’s a sign the the kitchen gets chaotic when busy. Not a fatal flaw, but still a detail that matters.

They made me a second Baby Jesus which was served hot. It was excellent.

Recommendation – Go hungry, but don’t go if you are in a hurry. This is a place to enjoy slowly. Younger kids may make that hard, but it’s still worth it.

This is my kids’ favorite pizza. Since we live a 110 miles round trip from Joe’s best location, introducing them to it was something of a mistake. Still, great pizza is great pizza.

Joe’s claim to fame is their crust, which is very hard to describe. They make their pizza using a what they claim is a 200 year old Italian yeast starter and they roll it out very, very thin. They then square off the crust (hence the name), top the pie, and cook it in a 900° F coal fired oven for roughly 1 minute.

Because Joe’s cooks their pizza at so high a temperature,  they can use very delicate toppings (like crab and Old Bay) yet still get that wonderful crust done before the featured ingredients overcook. I’ve had some sea food pizzas at Joe’s which were fabulous.

Saturday I tried Joe’s Braised Lamb Pizza. Without bragging, I think my Greek Lamb Pizza is better. But that’s about the only thing I’d hold up above their food. 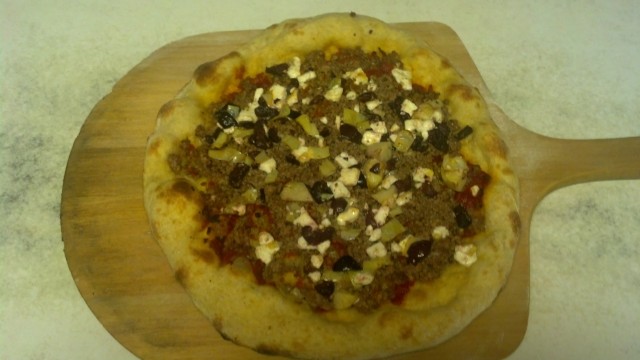 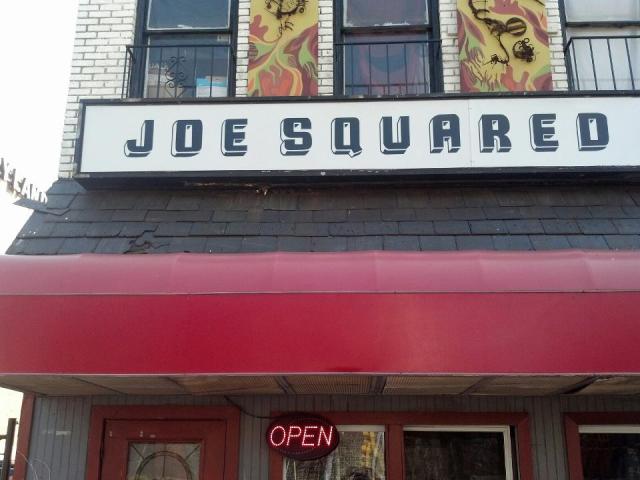 Recommendation – I love this pizza. The Station North restaurant is only 15 minutes from the Inner Harbor location. Go North, if you can. Otherwise, just go.

There are a lot of very good joints in DC.  Since I live here, I’ve visited them several times each. It’s high time I review them.

I read and I write. I read a lot and I write when I can.
View all posts by fzinger →
This entry was posted in Food and tagged Baltimore, Blue Moon, crab, Joe Squared, pancakes, R&R Taqueria, Tacos, Taqueria. Bookmark the permalink.