Two weeks ago I spent four marathon days cooking.  From Friday to Monday, I made black bean burgers on brioche buns, tacos al pastor, pressed pork tortas and a very successful New York style pizza. I promised to post the recipes from that weekend but I’ve been out of town, so I’m a bit behind.  Catching up, here’s the recipe for the New York-style pizza.

It’s all about the crust.

I’ve gotten pretty good at making Neapolitan pizzas in my Big Green Egg.  These pies, made with a high moisture dough and topped with an uncooked tomato sauce, cook at very high temperatures, upwards of  650° F, for 4 to 6 minutes.  They are delicious and worthy of sophisticated toppings, like Thai Chicken with Peanut Sauce of Tandoori Chicken. I love them. My son, though, has been lobbying for simple New York pizza.

New York pizza is an entirely different pie.  It’s crust isn’t the thin, crispy crust I’ve worked so hard to achieve.  New York crust is thicker, slightly chewier and more substantial. It has to support the whole slice when you’re eating it walking down the street.  It’s also a more complex crust. There has to be a thin crispy layer on the bottom, a chewy/bready lay in the middle and a slightly slick, almost under-cooked layer at the interface between the crust and the sauce.

To achieve this effect, I read a lot of recipes and blogs.  Once I had a consensus recipe to start with it took me two or three tries to get it right.

Low-kneading, minimally handled dough is a big trend in baking these days.  Instead of long kneading times to activate the gluten and build structure, these methods use other techniques to achieve the same effect without introducing as much oxygen into the dough. This is not only easier on the arms than all that kneading, purists also claim it avoids off, metallic flavors.

A typical recipe for minimally handled dough will use short bursts from a food processor instead of long stretches twirling on the dough hook of a stand mixer.  Some recipes claimed that you can make a dough which passes the windowpane test with as little as 30 seconds in the food processor.

Even using King Arthur bread flour, I could never get my dough to the windowpane stage that quickly.  I added an autolyse rest during the mixing phase and 4 rounds of Stretch and Fold. With that I could reliably pass the windowpane test without over-working the dough.

I’ll describe these techniques below.

Add water and oil.  Run processor until flour has absorbed water and is just starting to form into a ball.  Dough should be riding on top of blade and beginning to clean sides of bowl.  About 15 seconds.

Allow dough to rest for 5 minutes. This will allow it time to fully absorb the water and allow the gluten to form.

Run food processor for another 15 seconds.

Smear a small amount of olive oil across a clean work surface.  Transfer dough from food processor bowl to oil patch.  Knead lightly for 1 minute.  You should have a moist, shaggy dough at this point.

Flatten the dough into a square and stretch and fold it.  Hold the near side of the dough with one hand and use your other hand to pull the dough away from you.  Pull until dough just starts to tear on surface.  Fold one third of dough back to center of dough ball.

Hold the far side of the dough, at the fold, with one hand and use your other to pull the near side towards you until surface just starts to tear.  Fold one third of dough back to center of ball. 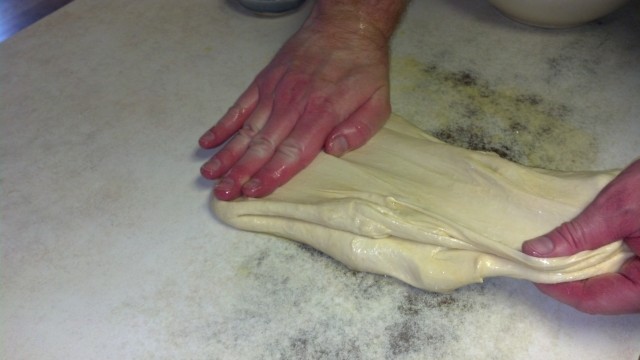 Repeat stretching and folding to the left and right. 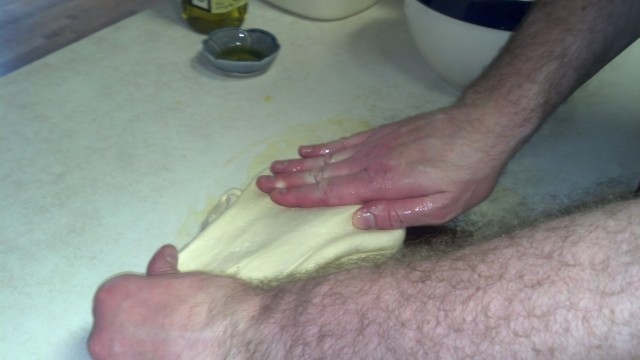 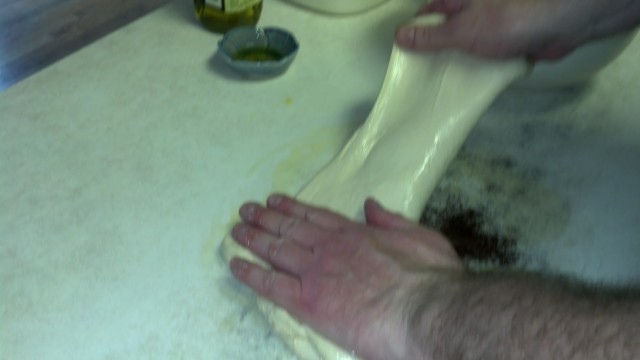 Flip dough ball over and rub surface with olive oil.  You should have a tight ball of dough with a smooth surface.

Cover with a large bowl and allow to rest 10 minutes.

After four stretch and folds, the dough should be smooth, elastic and easily pass the windowpane test.

Divide dough in half and form into tight balls.  Place on a baking sheet lined with parchment paper.  Cover loosely with plastic wrap and refrigerate one to three days. 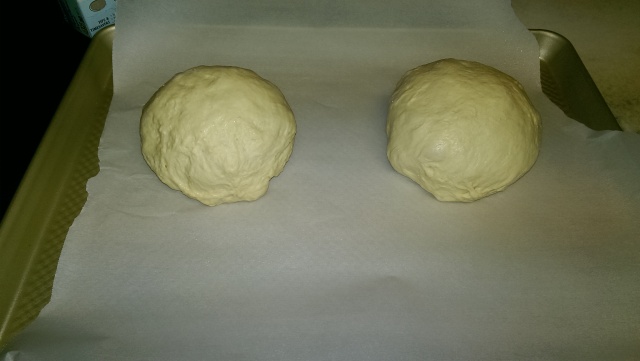 Remove dough from refrigerator 3 hours before baking.  Allow to rise at room temperature.

One hour before baking, position rack in center of oven.  Place baking stone on rack.  Pre-heat oven to 500° F.

Lightly flour one dough ball.  Flatten into a thick circle.

Using your finger tips, gently press down the center of the dough, working outwards to create a flat disk.  Leave a 1/2″ rim of unflattened dough to form the outer crust of the pie.  Be careful not to press the gas out of this rim.

Drape dough over the back of your knuckles and slowly pull your hands apart, stretching the dough out.  With a bouncing motion, slide the dough across your knuckles so your working a new section of the rim of the crust.  Pull that section and repeat.

The knuckle stretch is an easy move.  With a little practice, you should be able to quickly stretch the dough into  large, thin, uniform circle.  If you have high ceilings and you feel daring, you can even try throwing the dough by giving it a little toss and spin after each stretch, then catching it with your knuckles before stretching again. 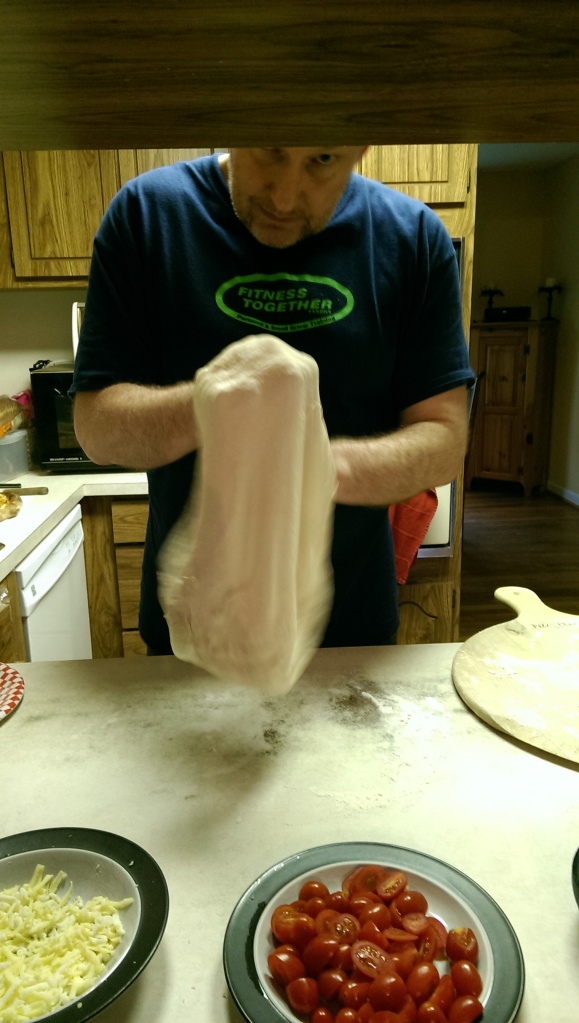 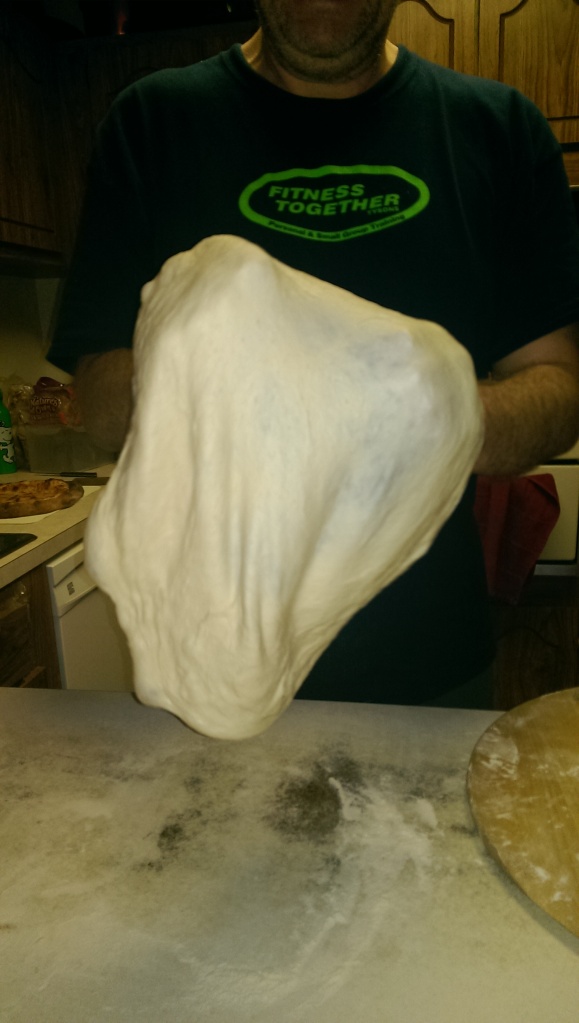 Notice the big bubbles in the rim of the crust.  Those will become nice, crispy, crunchy spots in the finished crust.

Place approximately one cup of sauce in the center of the pizza and, using the back of a large spoon or ladle, spread evenly across pie to the rim of the crust.

Do not over sauce the pie.  Too much sauce will result in a soggy crust.

Top with approximately 6 oz of cheese.  Don’t add too much cheese either.  A heavy, dense slice is not what you’re after. 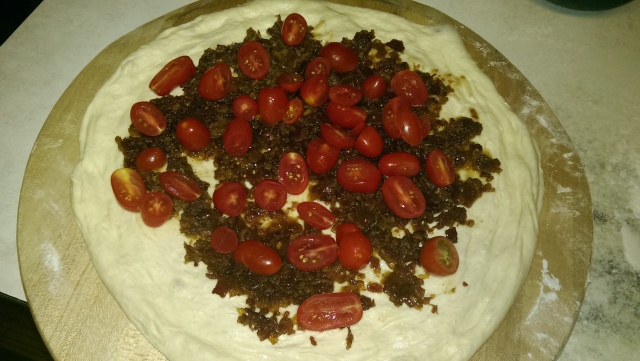 Using your peel, rotate the pizza 180°.  Bake another 2 minutes.  Check bottom of crust.  It should be crisp and just beginning to black in a few spots.  Bake another minute or two if needed.

That was one delicious pizza.  It’s going into heavy rotation at my house.

And here’s a simple cheese pizza.

I read and I write. I read a lot and I write when I can.
View all posts by fzinger →
This entry was posted in Food, Recipe, Uncategorized and tagged bacon, bacon jam, cheese, pizza. Bookmark the permalink.